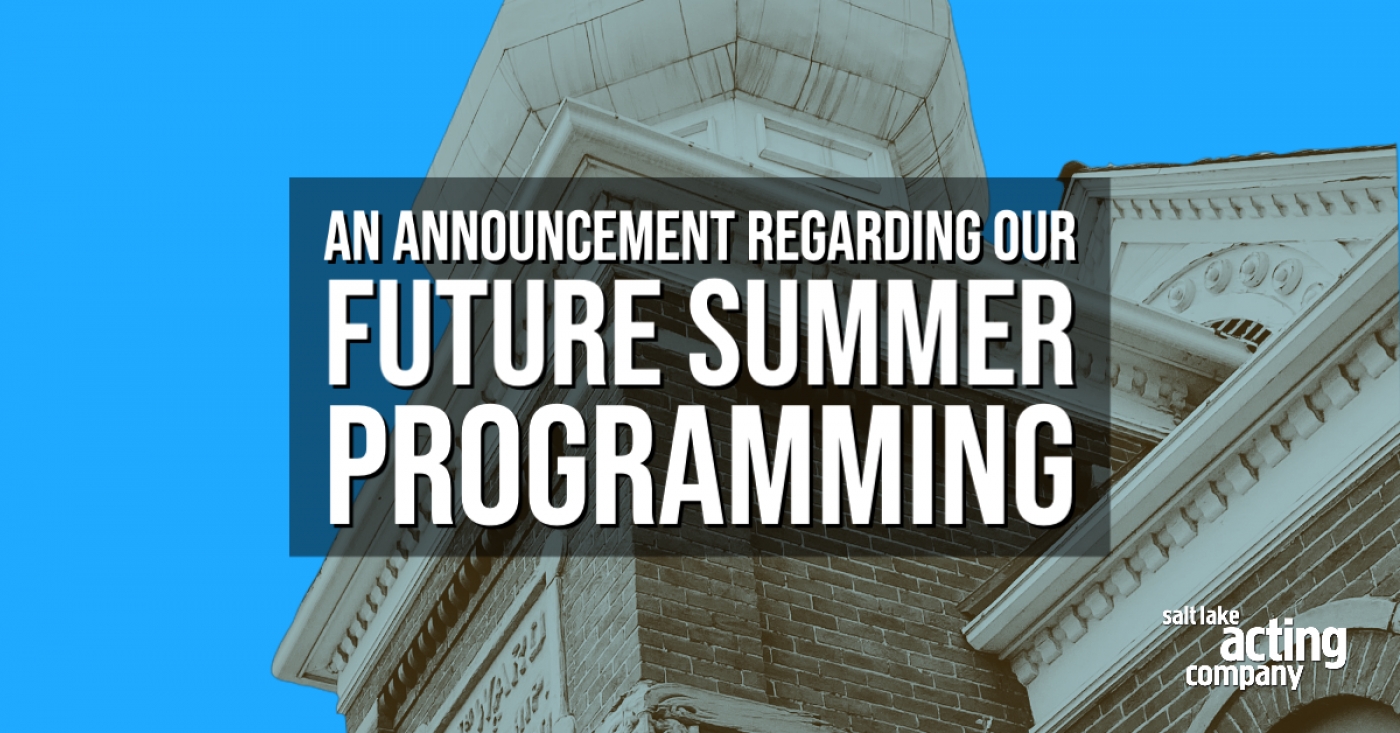 After four decades, the time has come for Salt Lake Acting Company to bid farewell to Saturday’s Voyeur and to produce an all-new summer cabaret series. SLAC is incredibly grateful to the show’s Co-creators, Allen Nevins and Nancy Borgenicht for their contributions to not only SLAC, but to the arts and political communities of Utah. Most importantly, thank you to everyone involved with Saturday’s Voyeur over its 41-year history both onstage and off. To our valued audiences, without whom this theatre company could not exist: we’ll remain your favorite summer tradition for you and your friends. The laughter and summer party atmosphere will continue at SLAC and we look forward to doing it the most diverse and inclusive way possible. We can’t wait to show you what we’ve got in store.

Created in 1978, Saturday’s Voyeur (then written by Nancy Borgenicht and the late Michael Buttars) began life in Elliot Hall, as part of Salt Lake Acting Company’s original residency in the First Unitarian Church-owned venue. Voyeur moved with SLAC to The Glass Factory soon after, and then to the theatre’s current home in the Marmalade District. Borgenicht and Nevins opted to take the production to the former Trolley Square venue Green Street in 1992 and 1993, before bringing it back to Salt Lake Acting Company in 1994.

“Salt Lake Acting Company will forever be grateful to the contributions made by Nancy Borgenicht and Allen Nevins,” said Executive Artistic Director Cynthia Fleming. “Voyeur has certainly been influential in my own life, as I have been involved as Director, Choreographer, and/or Executive Producer since 1995. I have such fond memories from the past 25 years.” She added, “In regard to our next steps for summer programming, what I can say is this: the raucous energy that our patrons enjoy and expect isn’t going anywhere.”

SLAC currently plans to announce its production lineup for the upcoming season (to be billed as its “49 ¾ Season”) later this summer.  For more information about the theatre, visit saltlakeactingcompany.org or call 801-363-7522.

The Salt Lake Tribune's full coverage of this announcement can be found here.

Scott D. Pierce: I guess the big question is — why? What prompted this decision? Has it been under discussion for a while? Did the pandemic have anything to do with making the decision now?

Cynthia Fleming: The future of Saturday’s Voyeur has been a big question for SLAC over the past decade. We’re keenly aware of what this show has meant to audiences--because we share the same love of the show, so the future of our summer programming has been a decision that SLAC’s board and I have weighed heavily. Prior to COVID-19, there was not a succession plan in place--but we knew that Nancy and Al wouldn’t be able to write Saturday’s Voyeur forever. COVID-19 has disrupted so many aspects of everyday life--and theatres are certainly some of the hardest hit in terms of needing to implement change in order to survive in the short term. One of the most frustrating problems we’re dealing with is the uncertainty factor. In order to plan for all variables, we have Plan A, Plan B, Plan C, etc…one thing that we do know, is that our upcoming (what we’re calling our 49 ¾) season is going to be historic. Yes, we’ve been planning for sanitation practices, we’ve been planning for a digital streaming component--but what is exciting is that SLAC is once again reinventing itself and remaining a beacon in the local and national theatre scenes. It’s a great place to start our next 50 years.

So, all of these factors played into SLAC’s board and staff identifying the right time to make a change. Saturday’s Voyeur leaves big shoes to fill, but to be honest, there were big shoes to fill every summer with each new iteration of Voyeur. One person’s idea of what Voyeur means might be drastically different from another’s. If we’re going to launch SLAC into its next 50 years, while boldly upholding our mission to strengthen our community, it’s time for a change. But, yes, COVID-19 is a huge factor. Regardless of what is going to be on our stage next summer, we’re still trying to responsibly navigate ourselves in preparing our stages for audiences, so the reality is that things are going to be scaled back, regardless. We’ll likely be operating on half the budget we were before the shutdown. I also want to reiterate that we’re doing this for the longevity of our theatre’s mission.

Pierce: “Saturday’s Voyeur” has been a big part of SLAC’s identity for a long time. And one of your big revenue generators. Any fear about moving forward without it?

Fleming: You’re absolutely right--for some, when they think of SLAC, they think of Saturday’s Voyeur. It’s had an incredible role in helping the theatre to fulfill its mission--it’s also emboldened us to be brave, unafraid of change and controversy. That is the spirit in which we’re moving forward now. During my own experiences working in the original Broadway run of A Chorus Line, I had the opportunity to work with a legend of the American theatre, Michael Bennett. He constantly reminded the artists around him to not get comfortable and that nothing lasts forever. That has fueled me ever since, and I believe it’s why I’ve had such a long career at SLAC--a quarter century in one capacity or another--because this theatre has gone through so much change.

That being said, one of the things we love most about our summers at SLAC is the sense of community spirit, not to mention a place for people to gather and laugh with their friends and family. And that is something that isn’t going anywhere.

In regard to Voyeur’s role as a revenue generator for SLAC, there is a bit of a myth around that. Much of the ticket revenue actually goes back into the production--the cast of 12 actors, the band, the designers, and the staff that runs the show--and of course the author royalties. It’s not an inexpensive production to mount! Voyeur would generate extra revenue for the theatre only in the one to two weeks on average that it would extend each year. However, using the time during Voyeur (and future summer programming) as a valuable season subscription drive has and hopefully will continue to serve a key role.

Pierce: What has “Saturday’s Voyeur” meant to you and to the company? Any memories that stand out?

Fleming: Saturday’s Voyeur began as a local voice for liberal theatregoers in search of like minded community. It has provided catharsis for many former members of the LDS faith, all the while serving as a portion of a much larger story told by our 50 year old theatre company. The board, staff, and the countless number of individuals who have worked on productions of Voyeur over the years will forever be grateful.

A particular memory that sticks out to me was circa 1996--it was the year the production featured an entire second act dedicated to the Enid Greene scandal, which was satirized along with Andrew Lloyd Webber’s The Phantom of the Opera. The creators were able to tap into the zeitgeist in such a way that hadn’t been seen in Voyeur before. There were third-party ticket sellers gauging prices due to the demand! It kicked off an era that was incredible to live through and work-on. A true sweet spot for Voyeur.

Pierce: What can you tell me about the new production? What are your hopes for it moving forward? Will you have annual, updated editions?

Fleming: I am really excited to talk about the new production...but it’s still very much in development. We’re assembling a writing team composed of local writers, as well as as an award-winning comedian and cabaret artist out of New York, who will be announced most likely in January as they begin to collaborate on next summer’s show. We’re structuring our team almost like a department of the theatre, accounting for writers coming and going, and allowing for new voices to amplify changing demographics and to be more inclusive. Another thing I’m excited to share is that we’ll be employing the same design and music teams.

I should also point out that this is a chance to reach younger audiences, who may have no reference point for Saturday’s Warrior (the original musical to which Voyeur owes its comedic namesake). However, we are confident that we’ll continue to also please our loyal summer fanbase, as we anticipate still being able to offer a fresh take on the culture and politics of Utah. And, of course, picnics are still allowed.

More in this category: BLACK LIVES MATTER. Announcing the Virtual and In-Person Productions of Our Unique "49 3/4 Season"